What’s the matter with us?! Reflections on racism in America

Posted on June 5, 2020 by mirthandmelancholy 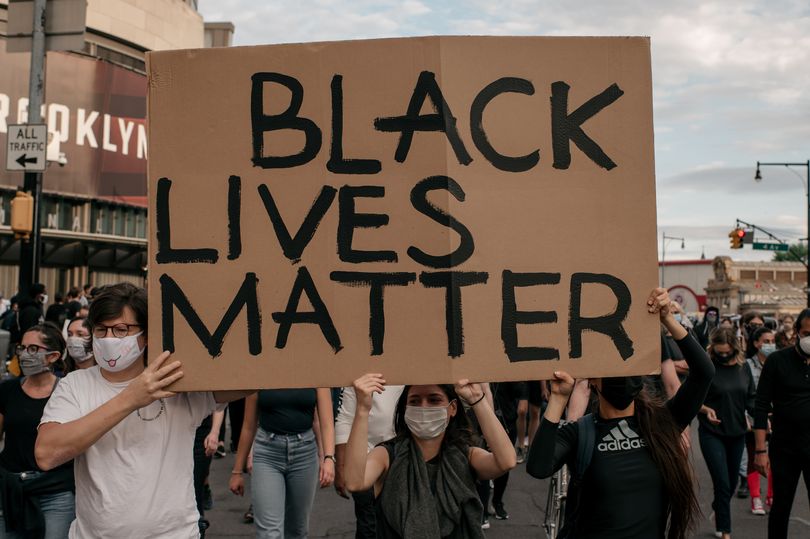 George Floyd is having an impact. Far more in death than in life.

What are we to say about the killing of yet another black man by police? This time, there is no controversy. He was not running away, or resisting arrest; he did not reach for a weapon. Instead, the police officer, Derek Chauvin, knelt on the back of his neck for over seven minutes, while he cried out in pain, ‘I can’t breathe.’ Three other police officers looked on and did nothing.

This was murder, plain and simple. Murder by a police officer who had 18 complaints against him. It seems that the Minneapolis Police Department had a bomb waiting to go off.

And so it did.

Rioting has broken out in many American cities. Stores have been looted. Tear gas canisters have been dispatched. People have died.  At the same time, hundreds of thousands have been marching peacefully to protest. Violence and peaceful protest – both running through the bloodstream of American civic life. On social media, families are falling out over this issue. Friends are being unfriended.

I guess that here, I should probably declare an interest.

I am married to an American. I have dual citizenship. I am an American. I am also British. I lived in California for twelve years. For almost ten years, I worked at the American Red Cross Blood Services. As a trainer, I worked with a cross-section of the Southern Californian population. About 35% white, 30% Hispanic. About 15% Black. Asians and others – 20%. More or less.

I had a black supervisor. I worked daily with black co-workers. Some I liked, some I didn’t. No more than any other race. One was called Dorrice – a very funny man. I happen to think Denzel Washington is the coolest man on the planet. Usain Bolt runs a very close second. I don’t like rap. I do like hip-hop. One of the men I most admire in this world is called Chris. He and his family feed homeless people in the park at the weekends. He is black.

I have had long conversations with black men about their lives in Southern California. Without exception, black men in particular are treated with suspicion by the police. Every single one of them described to me the numerous times they had been pulled over in their car for no reason whatsoever. It happens all time. Everyone knows it. In spite of all kinds of laws against what is called ‘racial profiling,’ it continues to happen. Black men are not necessarily harassed when they’re pulled over, but they must wait while the police check their ID documents. It feels humiliating. It doesn’t happen to white people. It only happens to black people.

I attended a church – predominantly white middle class – in which I had friends who were serving police officers. They were brave and they carried guns. Most of them had been shot at or attacked physically during the course of their work. It is not easy to be a police officer in a country where citizens have the right to bear arms. It is dangerous work.

And so to that slogan, ‘Black Lives Matter.’

First, a little history. It’s hard for us in the U.K. to get our heads around the history of a country like the U.S.A. Just because they speak our language doesn’t mean we understand their experience. It is not very long ago that Martin Luther King made his famous ‘I have a dream’ speech. Racial segregation was the order of the day in the 1960s. A country birthed in liberty in 1776 described a slave as three-fifths human. Three-fifths human! The civil war in the 1860s put paid to slavery but unleashed decades of unbearable suffering for black people. Especially in the South. Free, but still victims. The racism of the southern states never really went away. It’s still there today. When I worked for the BBC, I went to Georgia and visited a store selling two items: guns and bibles. Confederate flags – symbols of a racist past – adorned the walls.

So, how should Christians, in particular, respond to the ‘Black Lives Matter’ campaign?

There are some who wish to remind us that all lives matter. And indeed they do. But it’s not helpful. As one commentator put it, when my house is burning down, it doesn’t help me much if the fire department reminds me that all houses are valuable. The reminder that all lives matter is particularly unhelpful right now, because it seems to show an inability to show compassion for those who are suffering. If your son comes to you with a bleeding finger, you don’t tell him that his sister also has fingers and he needs to remember that.

Black Lives Matter is a commentary on the racism endemic within police departments. The demographics of crime have been highlighted by many journalists. Black people are no more likely to commit crime than white people, when you take socio-economic background into account. In other words, poverty is the determining factor for crime, not race. Black people struggle to receive loans, they do not have the same opportunities as white people. I could go on, but I would bore you. The world is not fair.

Do I believe in white guilt? No, I don’t. And I don’t find it helpful at all. I am not guilty for my race. I am not guilty because I’m privileged. I am not guilty because I have advantages others don’t have. And no one will succeed in making me feel guilty. Why? Because I believe the Bible is very clear on this. Guilt is something we each possess for the things we do and think. It is our behaviour which makes us guilty. Furthermore, it is our shared humanity which places us in the category of ‘guilty.’ For all have sinned and fallen short of the glory of God (Romans 3.23). So yes, I believe in original sin. I am born with a rebellious heart and am guilty for not treasuring God as he is worthy to be treasured and worshiped. That’s why I’m guilty, not because I happen to be born a particular colour.

So what is the answer to the crisis that’s unfolding? There are two answers and they are not mutually exclusive.

The Inside – This is the traditional Christian answer. It is partly right. As all Sunday school teachers will tell you, the answer is ‘Jesus!’ Christ is the hope of the world. For every human being. He is the one who has reconciled the world to God. He knows all about reconciliation and he calls us to this ministry of reconciliation. Read Ephesians and 2 Corinthians.

The reason that racism is so intractable is because of this rather trite, but profoundly insightful phrase: The heart of the problem is the problem of the human heart. The inside is where we have the problem. No question. Derek Chauvin’s problem was and is his heart. Jesus tells us that our hearts are desperately wicked. Yes, they are. I am not what I should be. I need grace each and every day. Every second. We cannot legislate love and compassion. We cannot change the human heart ourselves. We need God to do that. George Floyd himself had a violent, criminal past. He’d done time in prison. But by all accounts, he was trying to walk a different path. Did he try to pass a forged dollar bill? Does it really matter? He didn’t deserve to die on the streets like that. He was given life by his creator, and like us, he was a man in need of a Saviour. Just like Derek Chauvin.

The Outside – This is the response of those who want action from government. Right now, I have every sympathy with this view. Because while we can’t change the human heart, we have a responsibility to speak out to our lawmakers and demand better. One of the challenges for the Black Lives Matter campaign is that the slogan is really the only thing that is held in common. After that, it fragments. Each protester wants something different. What exactly do they want? Some don’t know what they want. They just have a yearning to live in a society in which the killing of black people stops. How to achieve that goal? Laws? Government programs? The answers are all disputed. Nevertheless, at this time, Christians should rally around the simple, basic premise that black lives matter. That lawmakers need to do more. That police departments must tackle endemic racism.

So yes, the only satisfying answer is Jesus, but we also need to recognise that politicians and police departments must do their part to change. We need to urge them to change. We want to live in a world in which a police officer like Derek Chauvin is identified early on as a risk, is disciplined, and if necessary, fired. It’s profoundly disappointing to see the response of the police union chief, Bob Kroll, describing the protests as ‘a terrorist movement.’ That has to change.

For one day, the wolf will dwell with the lamb (Isa 11.6). One day, the Prince of Peace will return and make everything right again. A hope like that should make us bold in our desire to live lives of reconciliation and peace.

Lord, may your kingdom come.

May your will be done.

On earth as in heaven.

← In praise of great writing
If words were people →